Meeting House Hill was the site of the original settlement cluster in Brattleboro after the Retreat Meadows was settled by John Arms, Samuel Wells and others. The first meeting house was built there in 1768, and the second annual town meeting was held there in March 1769.

The town was surveyed and allotted under the New Hampshire charter. Five acres were reserved for a common and burying-ground on the top of meeting-house hill, south of the centre line, and marked on the plan. They included the south part of the cemetery now there, and extended over a part of the open field south. The place was probably selected by Col. Josiah Willard, a commander at Fort Dummer, who became largely interested in the town and had the lot out of which it was reserved. The meeting-house would, of course, be built upon this common near the burying-ground, as was the custom then. That it was so built is clearly shown by the laying out of a road from the meeting-house to Ebenezer Hawes’s by Thomas Reeve and Noah Bennett, commissioners for laying out and regulating highways, June 23, 1774. – “The First Meeting House” by Hon. Hoyt Henry Wheeler, Vermont Phoenix, January 26, 1894.

According to 19th century sources, the meeting house itself was designed by Moses Johnson in the Shaker style with a gambrel roof.

The first official burial in the cemetery was that of young Joseph Frost, aged 2, who died and was buried at Meeting House Hill in September, 1770. However, it is recorded that the infant daughter of Samuel Wells, Elizabeth Wells, was buried at Meeting House Hill in 1765, where at the time, her grave was “in the lone woods, amid majestic trees, the entire hill being then covered with one dense, unbroken forest.” (“The First Meeting House” by Lewis Grout, Vermont Phoenix, October 12, 1894.)

Other famous denizens of the Meeting House Hill cemetery are John Arms and Samuel Wells, two of the first permanent residents of Brattleboro, and the colorful Madame Sherri of Prohibition Era fame.

The old meeting house is long gone, but the cemetery remains in use today. 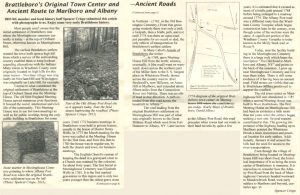 “Most people aren’t aware that the initial settlement of Brattleboro was where the Meeting House Hill Cemetery currently is today….The earliest Brattleboro settlers wanted the town built upon a high hill from which a survey of the surrounding country enabled them to keep a lookout regarding altercations with the Indians.”

“The road leading from the original Brattleboro settlement on Meetinghouse Hill was part of what was originally known as the Great Military Road which went from Fort Dummer to Albany, NY.  Later known as the Albany Post Road, this road precedes when towns laid out roads in their land records by a few years.  It is estimated that it existed as more of a bridle path around 1768 before being enlarged to a road way around 1774.”